About the Rabbinical Couple 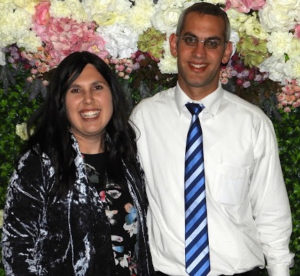 Rabbi Hillel attended Milnerton Hebrew Congregation as a child and had his Barmitzvah in the Milnerton Shul. He attended the Hebrew Academy for Primary and Middle School and matriculated from Herzlia High School. He went on to study in Johannesburg at the Yeshivah Gedolah of Johannesburg under Rabbi Azriel Chaim Goldfein, of blessed memory; and received his Semicha (Rabbinic Ordination) from Rabbi Goldfein in 2004. He then began working for the Yeshivah Gedolah as a teacher of Gemara (Talmud) and Halacha (Jewish Law), and ran the Semicha (Rabbinical Ordination) course for the next 13 years. He has lectured in various Shuls in Johannesburg, including Northfield Shul, Waverley Shul and Sunny Road Shul. He lectured regularly at Pembury retirement Home to the elderly under the auspices of SOSA. Rabbi Hillel taught Torah at various schools in Johannesburg and currently teaches at the Cape Town Torah High.

Rebbetzin Gina attended Dafna Nursery School and Herzlia Milnerton where she was greatly inspired with Yiddishkeit by the late Morah Doreen Katz. She matriculated in Johannesburg from King David Victory Park. Gina studied psychology and economics for her BA, and she also studied a Montessori teaching course. During her years at university, she was very involved with SAUJS and joined the SAUJS committee. This resulted in her getting more involved in Yiddishkeit. At the end of 1999 she went on the Ohrsom trip to Israel. This life-changing experience inspired her to stay for the year to study at Neve Yerushalayim. On her return from Israel,Gina worked closely under Rebbetzin Goldfein and ran the Charity Trust for the Aged, organising projects of Chesed for the elderly, as well as girls-Shabbatonim. Gina taught for many years at Hirsch Lyons Nursery School. In between raising her children, she also taught at Maiyan Katan Jewish Montessori, Maharsha and Shaarei Torah Nursery Schools.

In 2005 Rabbi Hillel and Gina Kramer got married. They are blessed to have 4 children: Racheli, Eli, Yaakov and Shevi. Racheli the eldest, celebrated her Batmitzvah at Milnerton Hebrew Congregation in 2018.

Rabbi Hillel and Gina have been Rabbi and Rebbetzin of the Milnerton Hebrew Congregation since 2018.

Our shul is run by a dedicated committee of lay volunteers/plainclothes superheroes, who work tirelessly to ensure our organization runs smoothly and continuously strives for bold new heights.